How do you know if you are triggered? 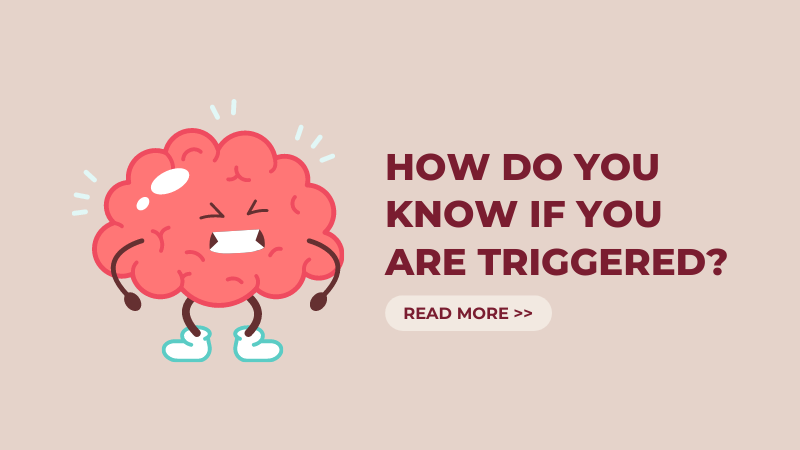 Triggers seem to come out of the blue.

And they can blindside us and lead us down a path we know is familiar and thought we were done with.

How do you know if you are triggered?

From my personal experience, it is when my behaviour changes rapidly.For example: This morning I was watching a random show on television about a boy who was angry about his mum dying from cancer and a tree had become his mentor to heal him. Watching the boy have a nightmare and lose his mother over a cliff into the abyss, and then the tree making him speak his truth (which was that he wished his mum’s battle with cancer was over) was the trigger.

A couple of days before my mum went into hospital for the last time, I sat in the car outside her house and felt this wave of emotion wash through me.

I leant on the steering wheel and said out loud, “I can’t do this anymore!”

I felt guilty, but also knew I was done emotionally and physically.

This happened less than 3 weeks before she passed.Back to this morning … an ad came on so I left the loungeroom to lie on our bed as suddenly I was sooooo tired I couldn’t sit up (even though I only woke up 2 hours ago).

I recognised the feeling in some part of my mind … and knew that this was a sign that my energy centres were out of balance and if I do my version of the chakra balance, I would feel better.I seemed to be floating above myself knowing this wisdom.So I did my chakra balance meditation and just as I finished Frank came in and asked me if I was ok.

He told me the end of the show that I couldn’t watch. As he did that I realised I was lying in the foetal position on the bed – and it was grief that had been triggered.

As suddenly as the tiredness had descended, it lifted.

I sat up and was clear headed and ready for my day to begin.

When we don’t know what the trigger is, the mind makes stuff up and creates a downward spiral of behaviour and thoughts.

When we recognise a trigger response, and have the tools to help ourselves – we can move through it quickly… without saying what is “wrong” with me and worrying that you are “no good”, “not enough”, and any other statement you can think of to put here.

A trigger is an autonomic response to something (it could be a smell, a sound, words, a look, an event etc) and it happens before thought or the mind engages.

So what do you do when a trigger happens … my daughter, Tash Lewin has taught me to ask,

“Does it belong to you?” If not, return to sender.

If it does, she says, “What are you going to do about it?”

Then you get to choose, rather than feeling like you are in a washing machine being tumbled about without any input.

This morning I recognised the feeling of not wanting to deal with the world … and knew to do the chakra balance … here’s the link if you want to try it out – http://insig.ht/gm_1474.

I was able to come through it in 15 minutes, rather than hours, days or weeks… because I have a toolbox of resources and I knew which tool to use.

Sometimes, we can be triggered when we have a big dream or goal and start taking action towards making it happen. Doubt or not feeling good enough are powerful triggers that show up as resistance or procrastination … it is not enough to say, “Get over yourself”, which I know many people’s self-talk or well-meaning friends will do.

What Tash and I have found working with our clients, is that when we dig deeper underneath the resistance/procrastination, there is trauma locked into the physical and subtle bodies. When you hear someone say I am triggered, or you feel triggered, this is a call for compassion, not judgment.

Having said that, if you are triggered by something, it is your responsibility to understand why and figure out what you want to do about the knowledge.

It is not up to other people to accomodate your trigger.

Hi, I’m Julie. I have been a medical intuitive for the past 37 years and an Intuitive Business Coach & Mentor for the past 12 years. Now, I have a new Mission. I want to help highly successful people live a life of expanded consciousness without feeling like they need to escape & renunciate their life…or feel like their life will implode if they go on this heart-driven exploration. I want to normalise what other’s think of as weird. We can live a life of spirituality, of deep connection to Source, without being seen as flaky or crazy or weird. Connectedness is sacred, and I treasure creating experiences of sacred life, lived moment to moment.