What do you do when you can’t make a decision? 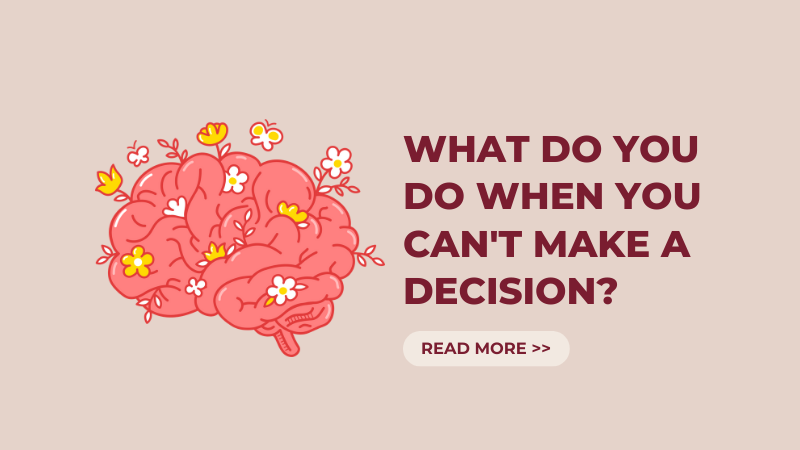 So a thing we learnt in the 12 month program we just completed is this idea that as humans we often make decisions based on the perceived primary gain or discomfort. We avoid primary discomfort and choose primary gain… even though it’s rarely what ultimately serves us.

For example I’m craving something tasty, so I turn to chocolate.

Now I know that chocolate gives me a migraine the next day and I won’t be able to work or do the things I like. But I’m not usually thinking about tomorrow, or the secondary discomfort. I’m making my decision based on the primary gain of it being delicious and it satisfying the craving.

So, often, primary gain decisions lead to a secondary discomfort.

Now, when we think about decisions that feel like a primary discomfort…say sitting down and doing the tax. This feels uncomfortable, it’s boring, it feels hard, it’s not fun… right? It’s a thing I would rather procrastinate on or avoid not voluntarily do.

But, on the other side of the discomfort, is a feeling of euphoria, there’s joy, there’s a weight lifted, there’s suddenly all this time available to do fun things.

Sometimes we prioritise what feels good in the moment, even though it can actually lead to a detriment. Sometimes we go, well if it doesn’t feel good, then I don’t want to do it. But, if we push through the primary discomfort, we reach even higher secondary gain.

I think when we first find human design, we often mistake available energy (sacral response) for something that has to feel good. And it takes awhile to truly recognise the expansion of available energy feeling, the upwards rush when it happens, especially if there is mental discomfort at the same time.

For example, having a hard conversation with someone can feel threatening, like it’s dangerous and they’re going to get angry at us… because that’s what the past has shown us. But, there’s actually this expansion of energy in our field at the thought of confronting the situation. It’s hard to feel that, because the mental loop is saying no, it’s dangerous. And the primary discomfort of fear is hard to overcome. But, if we can push through that feeling, no matter how the other person reacts, we get a feeling of joy and accomplishment because we did the hard thing.

Sometimes I like to look at the thing I’m avoiding being the the I actually need to do. Sometimes on the other side of doing it, I find it was the fear of the unknown that I was resisting not the thing itself. I’ll then use my avoidance, and the intensity of it, as my sign post for action taking. Sometimes, our ego is tricksy, it wants to keep us safe from perceived danger but it actually keeps us from growth and fun things sometimes.

So, when you have a decision to make, take a moment to ask yourself:

Hi, I’m Tash. My mum has been doing spiritual development work since I was a baby. It has been my life, my normal since then, my first language as it were. My childhood was rough…but it was in preparation for my Soul Work. I was always different, and I was ostracised more often than not. But when you have a Soul Mission, you need to go through the fire…just like diamonds are created under pressure and steel is hardened by flame. I know why I was called back to Earth at this time, my Mission is you. I am the Bridge between dimensions, and you will be upgraded being in my presence. I don’t say this to be arrogant or to gloat…I say it so you trust what led you here. It would be my privilege to be your Soul Work Midwife and to help you birth your Soul Work onto the world stage.